the full content of the original PC version, including the Reign of Giants expansion.

Don’t Starve: Pocket Edition, brings the hit PC Game enjoyed by over 4 million players to the iPad. Now you can experience the uncompromising wilderness survival Game full of science and magic on the go!

Play as Wilson, an intrepid Gentleman Scientist who has been trapped and transported to a mysterious wilderness world. Wilson must learn to exploit his environment and its inhabitants if he ever hopes to escape and find his way back home.

Enter a strange and unexplored world full of strange creatures, dangers, and surprises. Gather resources to craft items and structures that match your survival style. Play your way as you unravel the mysteries of this strange land.

Uncompromising Survival & World Exploration: No instructions. No help. No hand holding. Start with nothing and craft, hunt, research, farm and fight to survive.

Randomly Generated New Worlds: Want a new map? No problem! At any time you can generate a new living and breathing world that hates you and wants you to die.

**Don’t Starve: Pocket Edition is 40% off for a limited time in celebration of the Lunar New Year! 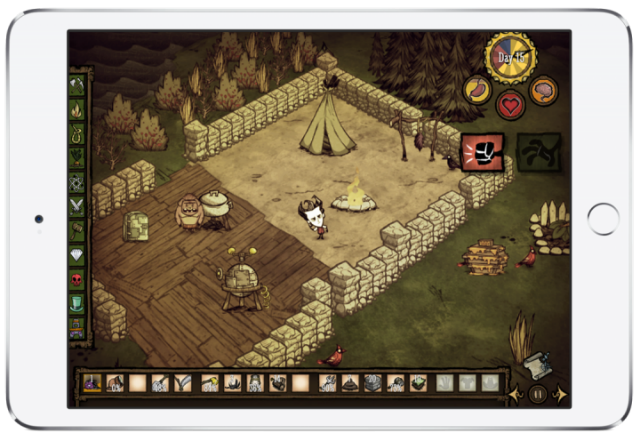