Welcome to Junk Jack X! It is a 2D sandbox where you can explore, build and survive in randomly generated procedural worlds, full of monsters, hidden treasures and beautiful landscapes, now even in multiplayer with friends!

We are glad to deliver you the best Junk Jack experience ever imagined! A sequel which brings the Game to a whole new level with multiplayer, multiple planets, creative mode, liquids, plenty of equipment to customize your character and much more! Plus all the features you loved from Junk Jack (and, we hope, less features you hated!)

This is not a freemium Game, buy it once and enjoy the full game experience!

** We’re aware of a small graphical glitch with skies and main menu on wide devices but it is already fixed and update already sent to Apple. Many apologies for that! **

Features:
– local multiplayer up to 4 players and online multiplayer up to 2 players
– a creative mode to unleash your creativity and build everything you can imagine
– a fully featured equip system with more than 390 different wearable items to enhance your adventures or just to make your friends envy!
– polished pixel graphics, full retina support
– tenths of wonderful music tracks by Bright Primate
– intuitive controls: swipe to move and tap to interact with everything
– an adventure mode that will let you travel between multiple planets with different and intriguing environments
– liquids to enhance or impede your explorations: avoid dangerous lava or go for a swim in a surface lake!
– infinite procedurally generated worlds to make every adventure always different
– a dynamic day/night cycle that blends with wonderful skies in parallax
– a vibrant lighting engine that will make you enjoy every minute spent in Junk Jack X worlds
– character customization, you can play also as a female!
– a rewarding exploration thanks to treasure chests full of cool things
– more than 750 crafts to be built
– more than 1600 treasures
– more than 350 placeable items
– more than 150 different creatures and monsters
– explosives, shelves, signs, dyes and all the features you liked in Junk Jack
– a complete farming system with more than 50 plants, even many alien and exotic plants
– an in game guide that will teach you how to play
– two ways of crafting to accommodate even needs of casual users

This version introduces a new gardening system: discover new flower types by combining their seeds and get more than 15000 unique plants! We also added a new planet called Mykon with new monsters, rare weapon drops, equip pieces, placeable objects and blocks. A new Tone Emitter device has been introduced to let you compose music directly inside the game! Last but not least we’re adding many bug fixes and tweaks which hopefully will improve your experience with Junk Jack X.

Check out the changelog below: 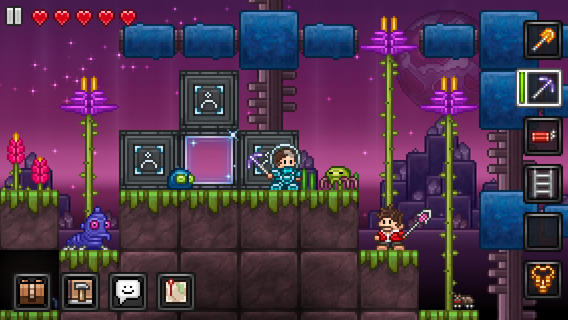 I don't strive to be #1, but to be the only one.
@AppleGuider
Previous DropDMG v3.2.8 For Mac – Quickly create disk image (dmg) archives
Next Shooty Skies – Endless Arcade Flyer For iPhone,iPad,iPod touch