Home / Games / Sentinels of the Multiverse v1.4.5 For iPhone,iPad,iPod touch

Sentinels of the Multiverse v1.4.5 For iPhone,iPad,iPod touch

“This is a must have addition to your digital board Game collection.” – Bradley Cummings, BoardGameGeek.com

“Sentinels of the Multiverse is another great adaptation that continues to bridge the divide between tabletop and tablet screen.” – Rob Thomas, 148Apps.com

“Whether you’re a fan of tabletop gaming or not, this Game has a lot to offer.” – Conor Lorenz, Gizorama.com

“The quality of the app is phenomenal, the production is beautiful, it’s just a lot of fun – Definitely worth $10!” – Duke of Dice Podcast

Calling all Sentinels! Do you have what it takes to defend the Multiverse? Compose a team of comic book heroes, each with their own playstyles, backstories, and grudges. Pit them against a variety of maniacal and formidable villains. Defeat your enemies and save the Multiverse!

Sentinels of the Multiverse is the award-winning game in which players join forces as heroes to combat a dastardly villain in a dynamic environment. At long last, you can play a 100% faithful adaptation of Sentinels on your iPad!

The digital version of Sentinels of the Multiverse plays like a comic book come to life! If you’ve ever turned the page to a climactic battle between Heroes and Villains and thought “I wish I could control this,” then Sentinels is the game for you!

The rules of the game are deceptively simple: Play a Card, Use a Power, and Draw a Card. What makes Sentinels of the Multiverse unique is that each card has special abilities that can create powerful combos or even change the rules of the game!

It also includes several unlockable variant (promo) cards:
• 8 variant heroes with alternate powers and backstory
• 2 variant villains for an all new twist on the battle
• Variants are unlockable via secret Sentinels storyline-based challenges!

Every rule & interaction in the game has been carefully adapted and thoroughly tested by expert Sentinels players, as well as the designer himself. If you’re wondering how a certain situation works in SotM, this game is the ultimate rules lawyer!

Features:
• Original music brings the Multiverse to life like you’ve never heard before. Rock out to the official Sentinels Theme Song, ambient tracks for each environment, and ending themes for each villain.
• Beautifully rendered environment backdrops put you right in the action.
• Brand new artwork for every Hero and Villain in the game, created by Sentinels of the Multiverse artist Adam Rebottaro himself.
• Over 9,000 different potential battles to choose from by combining the 10 Heroes, 4 Villains, and 4 Environments.
• Play a solo game with three to five heroes, or pass & play with your friends.

For more information on Sentinels of the Multiverse, check out SentinelsDigital.com or SentinelsoftheMultiverse.com

• Effects that “shuffle the trash into the deck” now shuffle the deck when the trash is empty.
• Fixed a problem where the effects of certain cards like Throat Jab could expire too soon.
• When multiple optional redirects are available, you are no longer prompted to choose the order.
• Many more small bug fixes and improvements have been made. 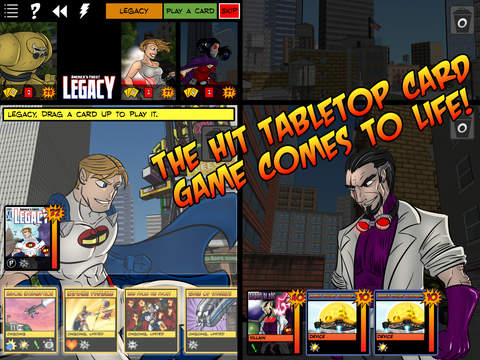 I don't strive to be #1, but to be the only one.
@AppleGuider
Previous Real Steel v1.25.1 IPA For iPhone,iPad,iPod Touch
Next Mail Pilot 2.0 DMG For Mac – Task-oriented email client.