The Ensign v1.55 For iPhone,iPad,iPod touch

The Ensign is a prequel to the viral #1 hit: A Dark Room.

Have to survive. The war’s not over.

“The Ensign is a fantastically weird and wonderful RPG that has plenty going for it, but only if you have the time and patience to peel away the multiple layers. 4.5 out of 5 stars” – 148Apps

“The Ensign will create dedicated players as you’ll overcome the frustration with confidence, which in turn will lead to longer gameplay sessions. The Ensign is truly a Game of its own, carrying much of the same qualities of A Dark Room which allowed this simple text-based Game to be enjoyable. 8.5 out of 10 stars” – Game Mob

“Like A Dark Room, The Ensign is difficult to talk about without spoiling the sense of discovery as you Unlock its secrets, but what I can do is tell you that the longer you play it, and the farther you get, the more impressive the world building becomes. It takes what seems like a fairly straight-forward objective (find this thing, try not to die) and then slowly unfolds its narrative and choices around you in surprising ways. 5 out of 5 stars” – JayIsGames

“It is full of revelations about the player character and the world it inhabits and, as such, becomes impossible to discuss at length without trading in awe-sapping spoilers.” – Pocket Tactics

“The Ensign is also a game of discovery—this is clearest when exploring the ASCII-based map steadily, a step at a time, praying for an abandoned house to relieve your struggle. The difference between it and A Dark Room is that it’s marked by two of the core tenets of games like Dark Souls: solitude and desperation.” – Kill Screen

Wanderer lore speaks of a god mode. They say you have to refuse food and complete the journey. They say great power will be given if done so.

Conquer, and become a god.

Fixed an issue where entering an H created a blackhole. The blackhole engulfed all existence… wanderers and humans alike. That shouldn’t happen anymore.

You should totally gift this game to your friends and family. Why suffer alone? 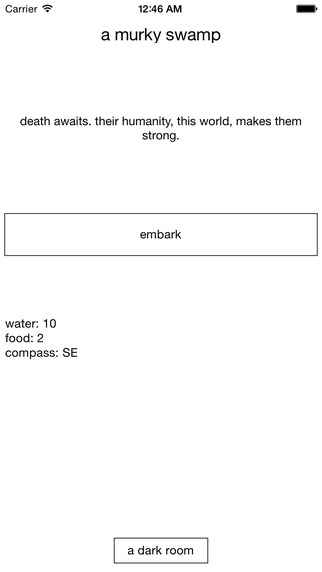 iOS Cracker. Contributor on iPlayPlus.net. Crackalicious = 1 in a Billion!!!! Versatility is the name of the game - I enjoy DJ'ing and I am a long-term established DJ playing various styles of dance music, as well as enjoying the role of moderating on various sites and being owner of others. Having benefited from the work of others in the iOS scene, I thought I would dive on in and help by giving back to the community. If I can make a difference to someone then it's been worth the while. Feel free to add me as a friend on Twitter.
@2Crackalicious
Previous iStreetView for Google Maps v4.0.1 For iPhone,iPad,iPod touch
Next Five Minutes Before v1.1 For iPhone,iPad,iPod touch