…Some games have a story to tell. Others make you think to get through a series of complicated puzzles. Violet Storm doesn’t have any of that. What is does have is pure, intense, unabashedly over-the-top, non-stop action – rendered in fantastic glowing-neon style with fast-paced techno music in the background.

It also has enemies – plenty of them. They come in various shapes, sizes, and colors, and all are coming for you, one way or another, in an infinite series of increasingly challenging waves to repel. To help you do that, we’ve included some fittingly over-the-top weapons. Take, for instance, a super-multi-laser bomb, which, when it explodes, shoots thirty-two rotating laser rays in all directions, destroying everything in its path. Or a five-way, triple-bullet blaster firing at an insane 1,000 rounds per second. Or a fast, triple-barrel homing missile launcher, which not only creates a spectacular show of blue trails, but also destroys anyone trying to even get close (or not so close) to you.

And the most surprisingly satisfying part? The enemies explode into lots and lots of pieces with the sound of shattering glass, which somehow irresistibly draws you in to keep going and going until no more hitpoints are left.

– Added separate volume and mute controls for music and sound effects.
– Increased control pad size and made them dynamic (position can be chosen by the player).
– Fixed a bug where bomb buttons would appear misplaced on the Retina iPad.
– Removed some occasional random slowdowns in the Game.
– Added support for all iPhone models. 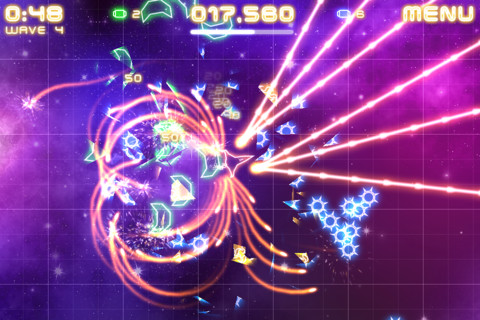 I don't strive to be #1, but to be the only one.
@AppleGuider
Previous FlickStackr for Flickr v2.5.2 fixed bugs
Next Violet Storm v1.21 gets speed optimizations